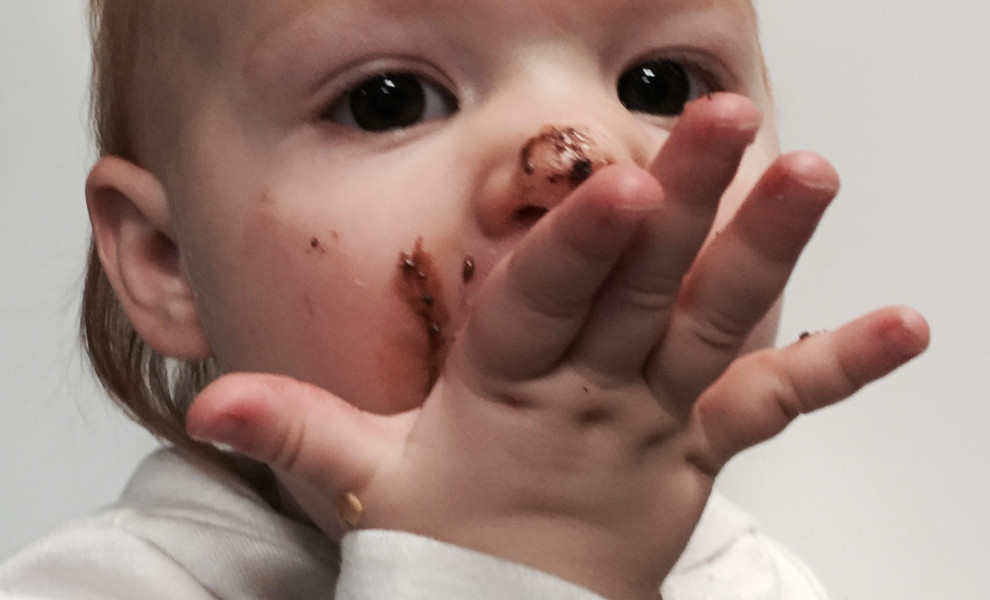 Last week my baby ate her own poo. Scooped it up out of her diaper and plopped it in her mouth. Cried when I wouldn’t let her eat any more crap. Tried to lick the feces off her face when I was washing her hands.

But as vomit-inducing as the experience was, it’s made me a better parent. No sh*t.

When I had my first three years ago, I was a typical nervous new mom who didn’t want her baby coming into contact with anything unclean. I fed her only 100% pure organic boob juice. I didn’t take her out into public for 4 weeks. I made my own non-toxic laundry detergent. Before I had kids, I could barely make toast and now I was making f*cking soap.

As she grew up, and, despite my best efforts, came into contact with a whole world full of un-organic, unwashed, GERMS, I started to relax. By the time number two came along, I began to let some stuff slide. Supply issues led me to formula feeding (not that there’s anything wrong with that.) And as adamant as I was to keep the bottle away from baby #1, this time around I was secretly relieved. I still pureed my own baby food … but let her eat a squeezy pack when we were out.  And maybe, just maybe, I bought her something made in China. But it’s not like I completely gave up.

I still followed her around with a bottle of Purell. I diligently fished everything out of her mouth that she just as diligently tried to put in it. Seriously. This kid was a legit vacuum cleaner, nothing in her path was safe. It was only a matter of time before she ate her own sh*t.

Funny thing about when the thing you’ve been dreading finally happens. My baby ate sh*t. And now I give less of one.

It’s totally liberated me and alleviated my parental anxiety in a way that no amount of medicinal marijuana could. And it’s not just about what she puts in her mouth. I’ve way relaxed about other things I used to be a hawkish about, too. If she watches tv, I don’t freak out about screen time. If she falls over, I don’t rush over to pick her up. And I no longer drive around with my windows up all the time because I don’t want her to breathe the LA smog. Oh yeah. I went there.

Now, clearly, there are many more horrible things that could still happen to my children. Some that will be out of my control and some that I probably could – but will fail to – prevent. And I’m not going to pretend they don’t still keep me up at night.  That’s the real sh*t. But as parents, there are so many small things that we worry about constantly, every day, in every way that ultimately make very little difference in the health and happiness of our children. So in the end, I’m very grateful to that tiny bit of poo that afforded me some extra moments of peace.

*disclaimer: about the image, of course that’s not poo!