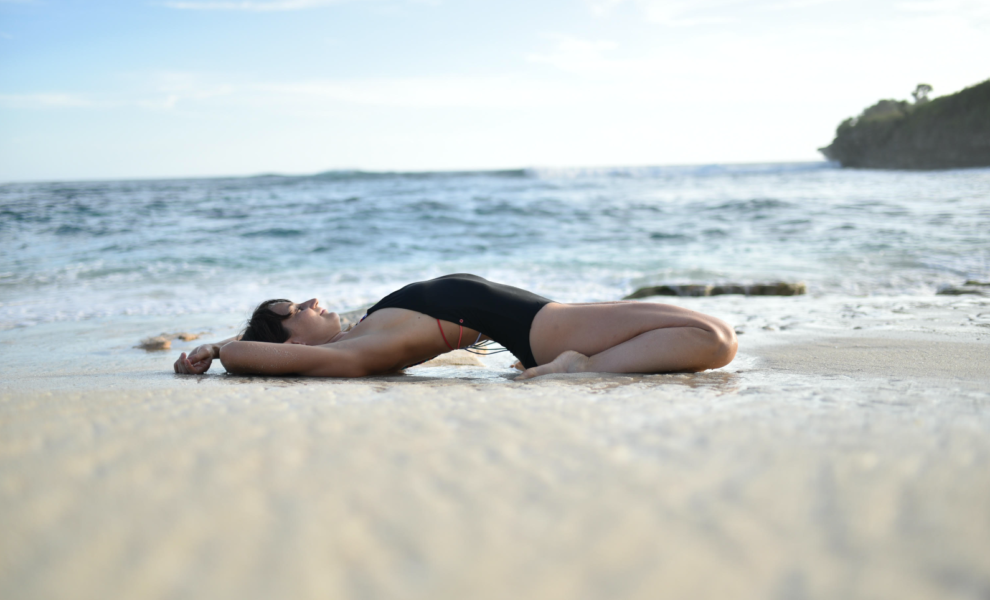 I was too excited to sleep. I knew my alarm would sound at 4:45 am, and the hour couldn’t come fast enough. It didn’t matter that I’d gone to bed late. I knew in my gut that the morning would be magical – and it was. My new friend Tutdi (pronounced today) and I watched the sunrise over the small boats in the Lembongan Bali bays while I did what I do. I was bending and folding over the little dinghies to make interesting yoga-inspired shapes. In between our stops around the small island, I would hop behind him on his motorbike, and we would zip around the coconut groves, stopping to play for a while under the shade of the trees. He howled, “Yoga is fun!” It’s altogether new to him.

The excursion ended as I floated under the bridge that connects Lembongan to Ceningan. The current was much stronger than I would have imagined given that the waters appear so still, so I did it again and again. It was a blast! On our way back to my hotel, I closed my eyes, and thought to myself,

“This feeling is just as beautiful as the nature around me. I want to hold it just a little closer and experience it a little more.”

You see, I wasn’t supposed to meet Tutdi. I wasn’t supposed to hear his sweet, delightful laugh, and learn from a local about the local Bali culture. I had different plans. Since October, I was corresponding with an Australian female photographer named Fifi (name changed for the story). She specializes in yoga and movement photography, and I liked her style. We were meant to work together. I was really excited, not only to capture some magic (part of my job), but more importantly to cultivate a real-life friendship with my pen pal. I felt like I knew her well, and I enjoyed our correspondence quite a lot. I had even recommended her to friends.

Now, the truth is that I don’t know her – and who she is or isn’t doesn’t matter one bit to the story. So I’d like to be clear that I’m not suggesting she is good or bad. She just wasn’t for me, and I wasn’t for her. In a way, our relationship was actually meant to go wrong.

I met Fifi on a Thursday morning in Canggu, Bali, for a quick shoot. When she walked into the room, I felt a rush of energy that I didn’t understand – or like. I couldn’t connect with her – at all, and it’s my job to connect. Excuse me for saying it, but I’m really good at it. I’m a people person, and to a fault, I see the good in everyone. Unfortunately or fortunately, however you look at it, I’m terrible at hiding my feelings. They show up all over my face and my body without me saying a word.

We met later in the day than any photographer would want to work, so I let her do the work she needed to do with my dear friend, and I didn’t do a thing. I just wrapped up the session, and debated whether I was going to make an excuse or tell the truth. I knew in my heart that I would have to tell her what happened. It took me an hour to write and kindly say, “I don’t think we are an energetic match, and I think we should cancel the rest of our scheduled time together.” She wrote back with integrity, and admitted that she was off her game, that something had happened. She tried to make it right, tried to make revised Lembongan plans with me. I considered because I really appreciated her willingness to own up to her part, but as the communications continued, it became abundantly clear to me that there was no way this could happen. I’m no longer in my 20’s and willing to overlook important information. This was not a match. I paid her what seemed to me an unfair amount for the hour of her time, and I let it go. I can afford it, and I don’t need pictures that badly.

Sunday morning, I set off to the islands of Bali with the understanding that I would be photo free, and all the brands I owed images to would have to wait for me to shoot them at home or somewhere else. They’d live. None of it was lethal, but I was sorely disappointed.

Out of nowhere, I met Tutdi. He appeared on my Instagram feed with the stunning images he captures of Bali, and we had a short exchange. I asked him if he’d ever worked with a yogi, and he said no, but “I can do it.” Game on! I thought, and anyway I was curious about meeting a local. The Balinese are some of the best, gentlest and kindest people I’ve ever met, so if the images didn’t turn out, I figured I would at least have an interesting time, and likely a good one.

Tutdi didn’t look the way I expected him to look. He was shy. He didn’t want to come into my hotel room without me formally inviting him to see the clothing I needed to photograph. He was sweaty, a little round, and he wore glasses. He made me laugh right away – and that matters.

He made my heart happy.

Tutdi, let’s be clear, is not a love interest. He has a girlfriend and he told me all about her, about their plans to marry, and his dream to come to NY. I said I would love to give them a tour around my island like he did his – and I meant it.

We spent a good deal of time in Bali together, and his rate was really low. I paid him more than we agreed upon because he deserved it. The photos that we captured together over the space of the morning and the sunset the day before are spellbinding, some of the best ones I’ve ever taken with anyone, and what’s more, they hold memories of a fast friendship, a moment where letting it go wrong led to what was right.

The whole experience reminded me to apply this thinking everywhere in my life. I need to look at the failures or missteps as some sort of pathway to what’s intended, and it’s true for us all. The “right” thing may come in an unfamiliar, unplanned and unexpected package. Let your ideas go to the wayside. Be open to spontaneous connections and be ready to make magic wherever you go. It might actually be cheaper and more beautiful than you dreamed. It – your life – might just take your breath away.

Let it go wrong so it can go right.